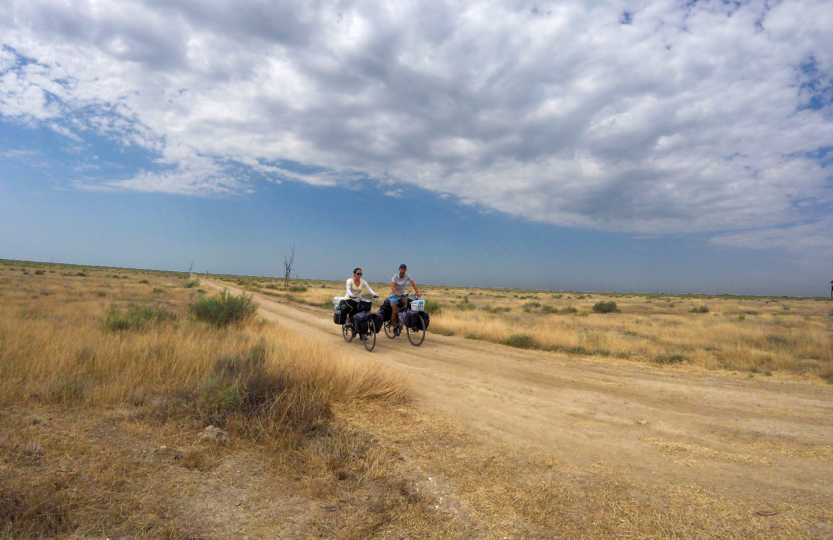 Sunday, June 3, 2018, we entered Azerbaijan, a country we cycled from west to east. Visa printed in pocket, we crossed the border between Georgia and Azerbaijan and it took us about thirty minutes.

After a few pedal strokes, at about 5km after the border, we met other cyclists: Elis and Lukas, a german couple (follow-the-sunrise.webs.com), with Adam, from England (adamtsultan.com), all three on their way to Australia. They laid camp in the grass near a river, but caught short by the heavy rain that didn’t stop for 2 days, they remained blocked and encircled by the water that had risen. When we met them, they were able to reach the road again, so we cycled together as we were going in the same direction.

Then after a long climb, we arrived in the town of Saki where we took a room in a Guesthouse in order to do the “registration form” that Elis told us about. In the evening we had dinner all together on the terrace of a restaurant and savour the delicious traditional dishes of Azerbaijan.

The country seemed more developed and richer than its neighbor Georgia: here the houses have better looks, the fields have fences and the roads are in good condition. We also saw buffaloes in the mud bath for the first time.

The country is secular and the main religion is Islam. Just like in Turkey. However we saw maximum three mosques, very few veiled women and many more women in skirt. In the month of “Ramadan” (fasting month for muslims) people were sitting outside drinking tea or beer. We also noticed that there were many billboards with the president’s photo. It was the same in the other muslim countries that we crossed.

Here again the people were adorable, we no longer count the services rendered spontaneously, the teas offered, meals or lodging. Only, very curious thing, they have the unfortunate habit of standing right in front of you, like at 1 meter, and staring at you. At the supermarket, it’s not uncommon to have an employee who follows you in the shelves, which makes you uncomfortable.

Never stop too long outside, otherwise you find yourself very quickly with a group of Azeri around you that stares at you, speaks to you in their language or in Russian for long minutes (here everyone speaks Russian). People are indeed very curious, they always ask where we come from and very quickly they ask us how much does our equipment cost, how much does our trip cost ? The money question intrigues them in particular.

Wednesday, June 6, we took the road again, the others left the day before. The north road of the country to Baku, the capital, offers splendid landscapes, we went from plains and green forests to the arid and ochre desert. We cycled under a harsh sun (temperature around 30 °C), climbed a mountain, suffered the rain a whole morning and then crossed a completely desert zone.

In Baku, Arthur took the opportunity to repair (once again!) his bike, this time it was the speed cable that had dropped. The young employee of the bike shop did not even want us to pay! With all this kindness and generosity that we experience through this journey, we can see that there are so much people who don’t have much, and who gives you half of it, without asking anything in return.

In Baku, the contrast between the capital and the rest of the country was striking. People are chic, there are only beautiful cars while everywhere else, everyone drives old Lada cars. The oil wells that abound in the region have visibly benefited to the city wealth. This wealth, however, has been poorly distributed.

We met again with Elis, Lukas and Adam, had dinner and drinks together and then we told them goodbye, as they were leaving for Kazakhstan. Have a nice journey my friends!

We stayed ten days in Baku to do our Iranian visa. We were then very fortunate to stumble upon Emre, that we contacted on Couchsurfing. He went to Turkey for a week to see his family and left us the key of his big and cozy apartment near the city center.

Monday, June 18, we finally got our visa for Iran which allows us to stay one month in the country. We took the south road towards the Iranian border, a flat road but with a lot of wind, a sea front not really accessible and highly industrialized.

Several times in the evening when we wanted to put our tent outside, people told us that there were many snakes and that’s how we were invited to sleep in restaurant rooms or gas station.

In the evening on a beach when we were looking where to put the tent protected from the wind, a man immediately came to us and gave us the keys of his hut so that we could spend the night there.

We saw the mud volcanoes, then spent a day in Shirvan National Park (2 manat entry per person, so 1 euro), a vast area of 54 000 hectares totally preserved where we could admire the many gazelles and migratory birds. We had a great day for Arthur’s birthday, followed by a typical open air Azeri restaurant on the bank of a river. Then the owner of the restaurant opened one of his rooms for us to sleep.

The road then became a bit unpleasant: very crowded, dented, not very wide, the wind increasingly strong on the face and a temperature between 30 and 35 °C every day.

Friday, June 22, we finally found a nice beach, on the outskirts of the town of Lankaran. A moment of relaxation well deserved, swimming in the Caspian Sea and sipping tea on a deckchair by the sea! In the evening the owner let us camp on his beach and offered us many teas.

We are about to leave Azerbaijan today Monday, June 25th, 2018, with lots of good memories of an amazing country where people are really cool. Next Step: Iran! So stay connected, like our Facebook page and follow us on Instagram.