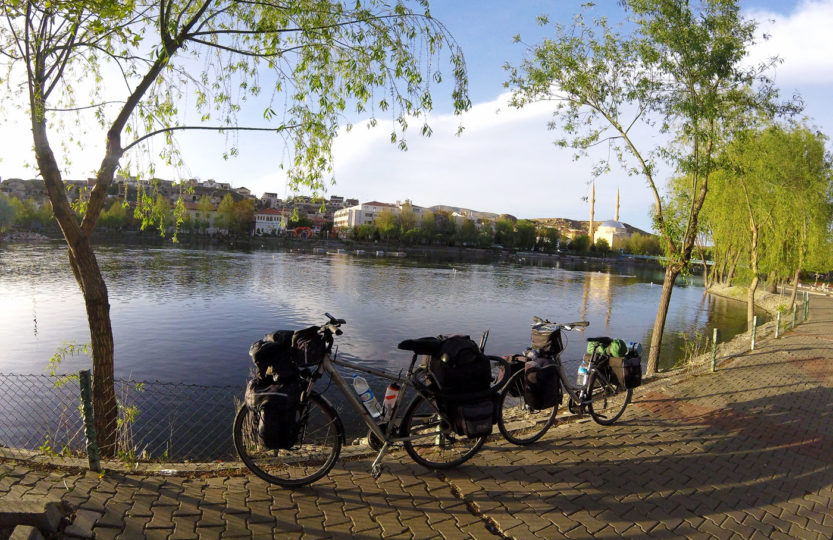 For a month and a half now that we are cycling across Turkey, the country is so big that we are only halfway there. We cycle on the highway to go faster: it is accessible to bicycles, in very good condition, free but quite monotonous.

We continued our way to Cappadocia, a region in central Anatolia famous for its underground cities and rocky cone landscapes, called fairy chimneys.

With our cyclists friends Alex (www.alexandreglemieux.ca) and Rémi (www.verslasoie.ca), we went to the Ihlara Valley.

The valley of Ihlara is accessible by a staircase, that you have to pay, in the cliff. Below, flows the Melendiz River and small wooden bridges allow you to go from one bank to the other. Formerly a refuge for Byzantine monks during the Arab raids, the valley is home to several richly decorated troglodyte churches (excavated in the rock). The hike is sublime!

The day before, after setting up our camp, we enjoyed a delicious feast around the fire made of potatoes and grilled meat on the barbecue!

Friday, April 13, we left the valley and pitched our tent in the evening behind the house of a villager, who despite his lack of enthusiasm at the beginning, ended up offering us tea and then at breakfast, bread. In the news this morning, the bombing of Syria by France, the US and the British. One of the neighbors who came to talk with us (only in Turkish of course) told us about it. We felt less serene about saying we were French.

We then stopped at the underground cities of Derinkuyu and Kaymakli, very impressive!

On the road, we start to feel like stars: drivers honk us regularly to say hello. A young woman parked on the side and wanted to take a picture and give us some fruit. But in town, without our bikes and without speaking Turkish, people often ask us if we are Syrian (there are today 3 million Syrians in Turkey).

Then towards the heart of Cappadocia, towards the famous fairy chimneys, these natural columns of rocks, where inside were dug many caves that once constituted the dwellings of the troglodyte peoples.

Then, passing by a shop in the village, the owner who heard us speak in french, asked us where we came from. Arthur replied from Nantes and the merchant said “ah, I was in Carquefou! “. What a coincidence to fall on a Turkish who was in Carquefou, a small town on the suburb of Nantes where Arthur’s parents live ! He then insisted on offering us tea and even breakfast at his shop the next morning. He learned french with tourists but for several years there are few french tourists in Turkey. Surely the consequence of the media that convey the image of a dangerous country, which is far from the reality.

Although the days are hot and sunny, in the evening the temperatures drop considerably, so we took a room in the village next door, in Göreme. Waking up at 5am, we went to admire the dazzling spectacle of balloons in the sky at sunrise.

Back at the hotel, sitting with Rémi and Alex for breakfast, we discussed our itinerary and pronounced the word “Kurdistan” two or three times in our conversation to designate the eastern region of Turkey. At the end of the breakfast, the owner asked us to leave his hotel immediately. He even reimbursed us in full the amount paid. According to him we do not have the right to pronounce this name in Turkey. We were shocked and faced with such a nationalist and extreme individual who suddenly puts his clients out, we took our belongings and went to the hotel next door.

This incident forgotten, we enjoyed the walks in the surrounding valleys, the card games outside and a good “testi kebap” in the village of Avanos (traditional dish of meat and vegetables cooked in a clay pot), always accompanied by our two traveling companions.

After Cappadocia, the city of Kayseri. Like all major cities in the center of the country, Kayseri is not worth the detour. The buildings are modern, the architecture without charm, with a conservative population.

With Kadir, who hosted us three nights at his house, we had dinner at the restaurants and had a good time.

Saturday, April 21, we cycled towards the city of Sivas. We easily find locals to host us on our way (thanks to Couchsurfing and Warmshower websites). Turkish people are always happy to welcome us and introduce us to their friends and family. We are often invited to eat or drink tea (impossible to invite them, they never let us pay anything), which starts to be a real problem because we eat too much. We are quite fond of Turkish food, the only downside is fruit and vegetables, bland, tasteless and hard to find on the road.

Police asked us to stop only to talk to us: they were curious to know where we came from, where we were going and they wanted to invite us to drink tea (a classic!).

Since we left the coast, all the young people we met admit that they do not like living in the central part of the country: forced to study or work in conservative cities, they get bored and feel oppressed by the weight of religion that limits their leisure and many activities.

Arthur, meanwhile, for a week had his eye itching : he took the opportunity in Sivas to go to a medical clinic where they removed the piece of wood that was stuck in his eye.