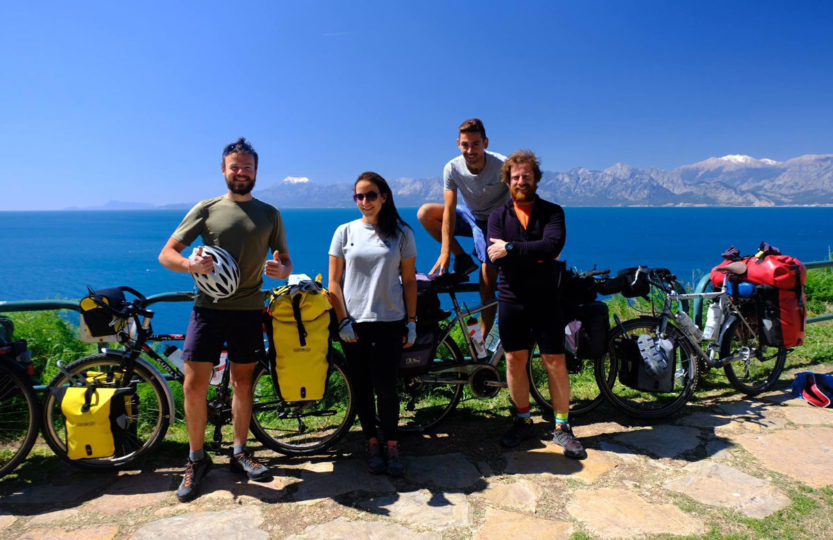 After more than 7,000 km traveled since this beginning of our bicycle trip, we reached the great city of Antalya, a pleasant and dynamic city, lined with long beaches and home to several archaeological sites.

Leaving Antalya, the coast has hundreds of huge resorts that stretch for miles. On the beach in the evening, in Çolaklı, between the huge hotels, we made our own camp.

After the Mediterranean coastline, we headed to the region of Central Anatolia in the heart of the country, a more conservative and more religious region. We crossed the Taurus mounts, which forms the southeastern border of the Anatolian plateau.

We came across many tourist mini-buses, most of them Germans, who come to visit the Altınbeşik Caves. We climbed at more than 1500m altitude. We managed to end this difficult climb after two days.

Behind the mountains, a vast plateau extends in all the center of the country: the road which awaits us on several hundreds of kilometers thus announces flat and without too much relief, we did the hardest part. While traveling through the mountainous roads and vast meadows of Anatolia, we are enveloped in a dazzling landscape that extends from both sides to the snowy peaks that dominate the plain.

In Konya, the most conservative of Turkish cities, in the heart of the country, we visited the mausoleum of Mevlana, Turkey’s second most visited site. A mausoleum is a sumptuous funerary monument of very large dimensions.

Here, in his tomb, rests Djalal al-Din Rumi nicknamed Mevlana (which means the “guide”, the “sanctified” or “our master”). Rumi was a mystic poet and a saint of Sufism (a mystical tendency of Sunni Islam). He is the father of the whirling dervishes, a brotherhood of 13th century Sufi Muslims, who turned on their own in an hypnotic dance to achieve trance. They are today a symbol of tourism in Turkey.

For our first night in Konya, we camped in a large park 5 km from the city. This Sunday morning, from 9:30, there were already groups and families who were preparing barbecues despite the weather a bit rainy (turkish people are very fond of outdoor barbecue). There were even newlyweds with their photographer. We then went to town where a young cyclist wanted to take a picture with us.

The other two nights, we were welcomed by Mucahit, a young research assistant at the university, with a huge generosity and hospitality. We had a great time with him.

We went back in seal, direction the city of Aksaray. We had to take the highway, straight, flat and monotonous. The drivers gave us little blows of horn, sign of encouragement. At the end of the day, we asked villagers to put our tent behind their house in the village of Esmekaya. They accepted willingly. We were once again invited to have tea and dinner in their home. A few minutes later, other members of the family and of the neighborhood were invited to come and see us. The communication was quite difficult, but with a little “Google Translation” we managed to communicate.

On Wednesday, April 11, we arrived in Aksaray, a city without much interest, but thanks to Önder and his friends, who insisted on inviting us to dinner and showing us around the city, we had a great evening.