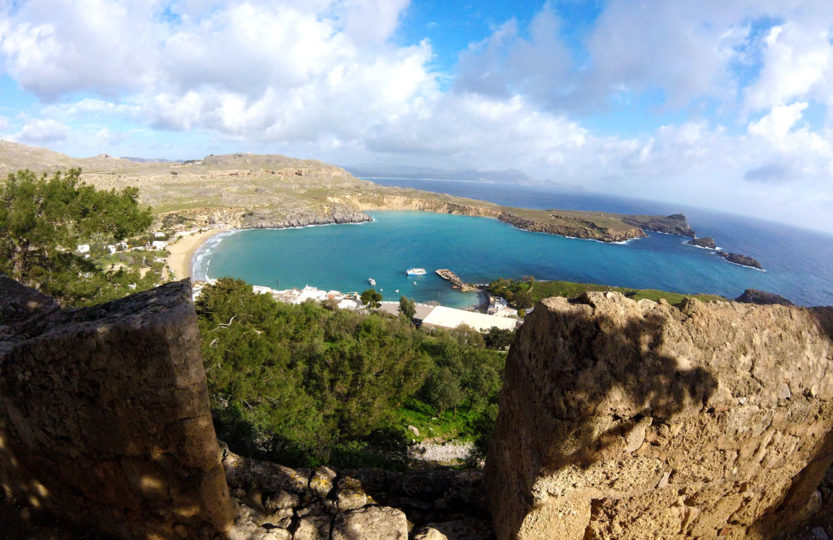 In this article, we take you to the island of Rhodes, the largest island in the Dodecanese archipelago, east of the Aegean Sea. Located a few steps from Asia Minor, you can see from the northern tip of the island the Turkish coast.

After 12 hours boat from Crete, we landed in the city of Rhodes, the main city of the island which bears the same name. As soon as we get off the boat, we can see the high ramparts of the old medieval town which are impressive.

The medieval city, built by the Knights of Saint John, is magnificent and so well preserved that it has been listed as a Unesco World Heritage site. A real dive in the alleys of an ancient city, its fortifications, its monuments and the mix between Ottoman architecture and Gothic buildings.

Like Crete, travelling in the island during winter have many advantages. We can escape from the flow of tourists who invade the places in summer, the prices are cheaper and it is easy to put our tent everywhere on the beaches.

We first went on a bike tour for 3 days, down the west Coast and then through the centre to a part of the east coast.

The landscapes are very different from Crete that we just left, a much greener and flowered vegetation surrounded by pine forests. At the beginning of March, the shops and restaurants are still closed and the beaches are deserted. We don’t cross a lot of people on the roads and in the villages.

We went down to the village of Lindos, where we visited the Acropolis, a must-do on the island.

But the ubiquitous wind, which made Arthur sick, prompts us to return to Rhodes.

In Rhodes town, we were hosted by Panogiotis from Couchsurfing. We were invited to see its play that he created with his friend Sophia, a drama teacher. On stage, in the pretty little theatre, Panos both plays his character, plays accordion and sings. The public was conquered and although we did not understand everything of the dialog, we greatly appreciated the show.

With Panos we did not have time to get bored : we went to see live music, to the restaurant with his friends, to the police station to help refugees, then on sunday evening we went to see the decisive football game between the team of Athens (AEK) and the team of Thessaloniki (PAUK). However, when PAUK marked the only goal of the game at the last minute, it was cancelled! On the ground, it was such a mess : presidents, referees, coaches and players were about to hit each other. The game was interrupted and we could not know the final decision. Panos hasn’t recovered yet!

All good things have an end, we had to leave, but Panos’ friend, Eleni, who lives on a small volcanic island very close, invited us to spend a few days to her place. So we extend our stay in the Greek islands with great pleasure!