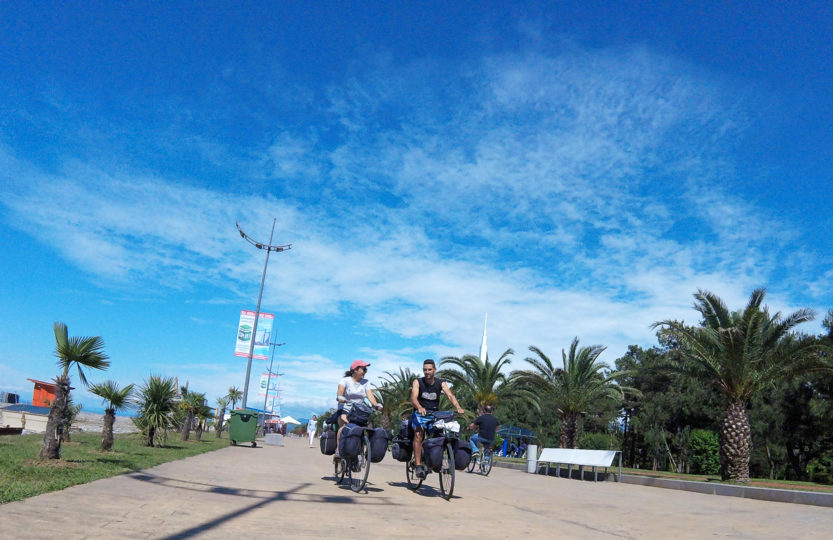 Here we are in Georgia, a former soviet republic, located in the Caucasus region, halfway between Europe and Asia.

From the first pedal strokes after the turkish border, we saw a church, the beach, children in swimsuits who were running barefoot on the road, people in the water. It was like a recovered freedom ! On the other hand, we soon realized that driving was more than sporty: everyone drove according to their own rules, that is to say no matter how, and we had to be more than careful on the road! In addition, georgians are great lovers of wine and chacha, a rather strong local alcohol.

We arrived Wednesday, May 9, 2018 in Batumi, the Las Vegas of Caucasus, which owes its nickname to its numerous casinos and its modern city centre dominated by high buildings. The outside of the city center on the other hand is the opposite: soviet buildings in ruins and small dilapidated houses.

But Georgia is also the country of very good food for cheap: fruits, vegetables, cheese, honey and other products that we could buy on the roadside for nothing, invited us to rediscover the true taste of natural food produced locally. On the kitchen side, we could not miss the famous Khachapouri, a thick boat-shaped bread with cream, cheese and an egg flowing in the middle. Very light to digest! But also Khinkali, big raviolis of peculiar form stuffed with meat. The only small little problem is that here they often have heavy hand on the salt.

In Batumi, despite the quite rainy weather we had, we enjoyed with our friends Alex and Rémi, the stroll along the beach, the ping-pong parties at our guesthouse and the many “crepes” that Arthur cooked us. The georgians are not smiling at first, but we quickly understand how sympathetic and hospitable they are. Indeed, barely three days in the country, georgians invited us to drink at their table and took us with them (and their 11-year-old son) to spend the rest of the evening in a karaoke. After the town of Batumi, we made a small detour in the Ajaria valley to the village of Keda.

We then went up the road, along this pleasant part of the coastline of the Black Sea, under a bright sun.

On the second night we found an ideal bivouac under large pine trees facing the sea and facing the sunset. However Chota and his friends, sitting in the grass drinking beers with smoked fish, invited us right away to join them. After five minutes, Chota made us understand that we would sleep at his house tonight. Throughout the evening we were served drink and food in abundance. We didn’t have time to finish our glasses and plates as soon as they were filled up again. We were very touched by this immense generosity and hospitality. And despite the language barrier, with a lot of gestures and smiles we were able to make great discussions. We had a great evening immersed in the heart of georgian countryside and culture, with Chota, his friend, his father and his neighbor.

In Georgia, during the meal, there is the so-called Tamada: he is the toastmaster. He raises his glass and toasts to the health of everything and anything. Once the toast is over, everyone drink its glass in one go. And it’s repeated five, ten, twenty times. That evening, Chota’s friend was the Tamada. Then when the Tamada said stop, the meal ended and we were all able to go to sleep. Awakened at 6am, we were invited to have breakfast at the neighbour’s, with fries and fish on the table for our greatest happiness. For the father of Chota and the neighbor, it was chacha before the coffee, 75cl in 30m. Never seen.

We left our wonderful hosts, heading to the town of Poti, taking a short fishing break at Lake Paliastomi.

We then took the direction of the city of Kutaisi, the second most important city in the country after the capital. A pretty friendly town with a small historic center. We stayed there the weekend to rest a bit.

We were then on our way to Tbilisi, the capital. The road was really nice and sunny. We cycled along a very beautiful valley and camped by a river with our friends, the dogs, who watched over us until the early morning.

15km before the town of Gori, the birth city of Staline, a pouring rain fell on us and we had no shelter on the horizon. It’s all soaked that we arrived at Hasan, our Turkish host. Thanks to him we were able to eat a good meal and dry all our stuff. We spent two nights in Gori and visited the Museum of Staline.

Again on the road, we made a stop at Uplistsikhe, one of the oldest cave cities in the Caucasus.

While we were taking a break to make a sandwich, sitting in front of a house, a lady came out and invited us inside to drink tea and taste her homemade products. We left with some gifts of the house, bottles of juices and pots of candied fruit which she made herself from her garden.

Once again, we realized how hospitable the world are. The world is wonderful, it is not the world they make us believe it is. It is not a dangerous world where people want to steal from you, but it’s the opposite. At every corner, at every house people wants to help you, open you their door, offer you a meal or accommodation and that no matter where you come from, language barrier, religion or political conflict. Through these values of humanity, solidarity and sharing our cycling journey makes all its sense.

We finished our day in Mtskheta, a small historical town (20 km before Tbilisi, the capital) and former capital of the kingdom of Iberia from the 3rd to the 5th century. We laid the tent on the edge of the Kura River and were once again inviting to drink and eat dried fish with young people who were there.

We arrived in Tbilisi, the capital, Thursday 24 May 2018, at Alejandro’s, our Colombian host and spent a week visiting this amazing city, with contrasting architecture and special beauty.